“I will now examine the indictment and the warrants to take the appropriate measures,” Mirza told reporters following a meeting with a three-member delegation from the Special Tribunal for Lebanon (STL).

A judicial source told The Daily Star that the indictment identified the suspects as Mustafa Badreddine, Salim al-Ayyash, Hasan Aineysseh and Asad Sabra.

The statement also said that Pre-Trial Judge Daniel Fransen had confirmed the indictment on June 28.

“At this time, the STL has no comment on the identity or identities of the person or persons named in the indictment. Indeed, Judge Fransen has ruled that the indictment shall remain confidential in order to assist the Lebanese authorities in fulfilling their obligations to arrest the accused,” the statement, published hours after the delegation had ended its meeting with Mirza, said.

The confirmation of the indictment meant that Fransen was satisfied that there was prima facie evidence for this case to proceed to trial. The statement also said that this was not a verdict of guilt and any accused person was presumed innocent until proven guilty.

“Under the STL’s rules of procedure and evidence, the Lebanese authorities have to report to the STL on the measures that they have taken to arrest the accused, at least within 30 days of the submission of the indictment,” the statement said, adding that U.N. Security Council Resolution 1757 was clear on the steps to be taken by Lebanon regarding the arrest, detention, transfer of the accused to the STL.

The STL delegation handed over to Mirza the sealed indictment and arrest warrants for the four suspects during a meeting held at Mirza's office at the Justice Palace in Beirut before midday Thursday.

Hezbollah has denied involvement in the Hariri assassination and has described the international court as part of an "Israeli-American project,” aimed at targeting the resistance and sowing strife in the country.

Speaking to a local radio station during a break from talks at Baabda Palace, Minister of State of Administrative Affairs and Hezbollah member Mohammad Fneish said: “When we see the [STL] indictment, we will comment on it.”

Badreddine is a cousin and a brother-in-law of Hezbollah’s slain commander Imad Mughniyeh, who was assassinated in Syria in 2008. Badreddine eventually replaced Mughniyeh as Hezbollah’s chief operations officer.

According to the indictment, Badreddine masterminded and supervised the plot to assassinate the Lebanese statesman while, Ayyash, 48, is alleged to have headed the cell that carried out the assassination of Hariri.

Lebanon, according to experts, now has 30 days to serve out the arrest warrants. If the suspects are not arrested within that period, the STL will then make public the indictment and summon the suspects to appear before the court.

The findings of the tribunal have been the subject of wide speculation in Lebanon and there is fear that an indictment of members of Hezbollah, which dominates the new government, could spark sectarian unrest.

Interior Minister Marwan Charbel said Thursday the indictment to implicate Hezbollah members was not a verdict and therefore was not of great importance.

“Why the big deal? It’s just an indictment and not a final verdict. So why all this fuss?” he asked.

Charbel reassured the public that the “security situation is good.”

Hariri was killed with 22 others on Feb. 14, 2005 when a massive blast struck his motorcade in a seafront district of Beirut, sending tremors through a country still haunted by memories of its 1975-90 Civil War.

The assassination sparked the so-called Cedar Revolution, a wave of mass protests that, combined with international pressure, forced Syria to withdraw its troops from Lebanon after a 29-year deployment. 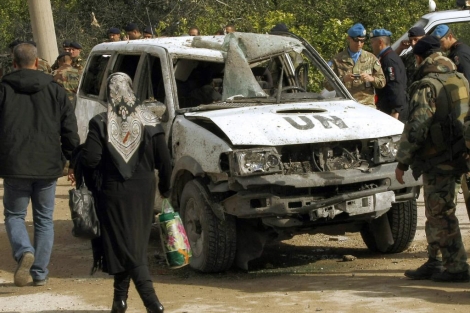