Suspected bomb found in London
Police have made safe a suspected car bomb in the heart of London.
Officers carried out a controlled explosion after reports of a suspicious vehicle parked in The Haymarket shortly before 0200 BST (0100 GMT).

The immediate area was cordoned off while police examined what they described as a "potentially viable explosive device".

There are unconfirmed reports that gas canisters were removed from the back of the car, close to Piccadilly Circus.

The government's emergency unit Cobra has called a meeting in response to the meeting and the new Home Secretary Jacqui Smith is due to attend. 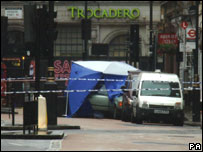 One police source said the bomb was a "big device" and posed a real and substantial threat to the area around The Haymarket, which is in London's theatreland. A witness reported seeing gas canisters being removed from the car, believed to be a silver Mercedes, at around 0400 BST (O300 GMT).

Bouncers from a nearby nightclub said they saw the car being driven erratically before it crashed into a bin. They said the driver then got out and ran off. Dozens of forensic officers were today poring over the scene, which was covered by a blue plastic police tent.

Scotland Yard said detectives from Counter Terrorism Command were investigating the potential bomb plot and will be checking all the close circuit cameras in the area. A spokesman said: "Police were called to reports of a suspicious vehicle parked in The Haymarket, shortly before 2am this morning.

"As a precautionary measure the immediate area was cordoned off while the vehicle was examined by explosives officers.

"They discovered what appeared to be a potentially viable explosive device. This was made safe. "The Metropolitan Police Counter Terrorism Command has launched an investigation." Police say The Haymarket is likely to remain closed for some time and severe travel disruption is predicted.

Piccadilly Circus Tube station is closed and trains are not stopping, while local bus services are being diverted. The BBC's Daniela Relph, at the scene, said the heart of London was completely closed off and police officers were concentrating on keeping people away.

Thousands of commuters have been unable to get to work.

Professor Paul Wilkinson, a terrorism expert, said a passer-by had tipped off the police and officers would be concerned they did not have advanced intelligence. Intelligence sources said they were keeping an open mind on who was responsible for the car bomb. "All options, including the Irish, are open at this stage," said the source.

Defence Secretary Des Browne said: "It does appear to be a very serious incident. "My first reaction to this is, thank God that we have police and explosives experts who can make these devices safe, and the arrangements they appear to have done, and that nobody has been injured."

Extra security measures have been put in place at Westminster, MPs and peers have been told.

Hours before London explosives technicians dismantled a large car bomb in the heart of the British capital's tourist-rich theater district, a message appeared on one of the most widely used jihadist Internet forums, saying: "Today I say: Rejoice, by Allah, London shall be bombed."

CBS News found the posting, which went on for nearly 300 words, on the "al Hesbah" chat room. It was left by a person who goes by the name abu Osama al-Hazeen, who appears regularly on the forum. The comment was posted on the forum, according to time stamp, at 08:09 a.m. British time on June 28 -- about 17 hours before the bomb was found early on June 29.

Al Hesbah is frequently used by international Sunni militant groups, including al Qaeda and the Taliban, to post propaganda videos and messages in their fight against the West. There was no way for CBS News to independently confirm any connection between the posting made Thursday night and the car bomb found Friday.

Al-Hazeen's message begins: "In the name of God, the most compassionate, the most merciful. Is Britain Longing for al Qaeda's bombings?" Al-Hazeen decries the recent knighthood of controversial author Salman Rushdie as a blow felt by all British Muslims. "This 'honoring' came at a crucial time, a time when the whole nation is reeling from the crusaders attacks on all Muslim lands," he said, in an apparent reference to the British role in Iraq.

"We say to Britain: The Emir of al Qaeda, Sheikh Osama, has once threatened you, and he carried out his threats. Today I say: Rejoice, by Allah, London shall be bombed," the message reads.

Speaking at a news conference Friday after the bomb scare in central London, the Metropolitan Police force's Counter-Terrorism Commander Peter Clarke said that officials had "no indication that we were going to be attacked this way". Prior to the Thursday night posting by al-Hazeen, there had been no specific allusions to threats against London or Britain seen on al Hesbah, or any other major jihadist forums in recent weeks.

Several responses to the posting by other forum members expressed hope that an attack against London would be realized in the near future.
In response, al-Hazeen urges patience, saying, "Victory is very close, but you are just rushing it."

Reached by CBSNews.com Friday, the Metropolitan Police's media office could not confirm whether investigators were aware of the Internet posting on al Hesbah.

Intelligence sources who spoke to CBS News Friday morning seemed to express surprise at the discovery of the device, suggesting there had been "no warning, no intel, no smell" as a prelude to the plot — a vacuum of information which reportedly had Britain's domestic intelligence agency "very, very worried".

The attempted bombing in London's Haymarket area came one week before the second anniversary of the July 7 bombings that killed 52 people on London's transportation network.

Also Friday, a London jury was expected to hand down a verdict in the case against five young men who were charged with trying to blow up city buses and trains in 2005.

The men, all from London, were arrested after police found homemade devices on trains and buses that had failed to detonate properly — sending puffs of smoke from backpacks that frightened commuters, but injured no one.

Early reports from law enforcement officials indicate that the car bomb found Friday morning may also have failed to detonate properly — causing smoke to appear in the passenger area. It was the smoke that prompted people to call explosives officers to the scene.

One explosives expert told the British Broadcasting Corporation that the device — comprised of gas canisters and nails — appeared to be a fairly crude construction, and not the work of anyone with an extensive knowledge of weaponry.

Britain has wrestled since the July 7, 2005, over how to deal with the threat of "homegrown" terrorism. Young men from the country's large Muslim population are easy prey for radical clerics and propaganda campaigns propagated on Internet forums such as al Hesbah.

In addition to messages calling for jihad in Britain, detailed video demonstrations of how to construct bombs using gas canisters are readily available on the forums.
http://www.cbsnews.com/stories/2007/06/ ... 7517.shtml

Nightclubs across Britain were warned they could be terrorist targets just days before yesterday’s attempted double car-bomb attack in London, The Times has learnt.

Two cars packed with petrol, nails and “patio gas” canisters were left primed to wreak destruction among London clubbers making their way home after a Thursday night out. Only the vigilance and courage of ambulancemen and police officers prevented massive loss of life.

One car, a pale green Mercedes, had been left outside the Tiger Tiger nightclub in Haymarket. A second, a blue Mercedes, was left a few hundred yards away in Cockspur Street, a busy thoroughfare close to Trafalgar Square. This vehicle was towed away at 3:30am on Friday to an car pound on Park Lane by unsuspecting parking officials.

Had either device gone off it would have generated a huge fireball and a shockwave spreading over 400 yards in all directions. If, as suspected, one had been primed to detonate before the other, people fleeing the first blast could have been caught by the second.

Yesterday a hunt began for the drivers of the two vehicles, and footage from dozens of CCTV cameras in the area between Piccadilly Circus and Trafalgar Square was being examined. The discovery of the bombs confirmed the fears of counterterrorism chiefs, that al-Qaeda would bring Iraq-style tactics to Britain.

The drama came as it emerged that a 53-page document alerting businesses to the threat posed by VBIEDs — vehicle-borne improvised explosive devices — had been issued to police two weeks ago. It had been passed on to the Tiger Tiger club only a few days before yesterday’s events.

The incident also appeared to be foreshadowed by a posting on an internet forum used by terrorists, saying: “Today I say: Rejoice, by Allah. London will be bombed.” 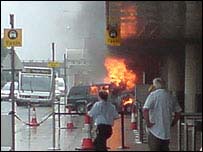